I’ve been listening to Petra Haden‘s recordings for years now. I’ve never had the pleasure of hearing her sing live, but still respond to a vibrant directness, a deeply engaging vitality, that inheres in her music, particularly in the overdubbed choric covers of popular song that she’s been self-releasing through YouTube and Facebook. I associate her vibrancy with an adaptive, attentive and essentially improvisatory approach to singing—improvisatory not despite the compositional fixity of any recording, but as a structural principal of this kind of recording. That claim needs to be argued, rather than taken as a given, and making a version of that argument is what I’m starting to do in the essay I’m posting here; it’s a paper that I delivered on Friday, March 30, 2018, at UCLA during the annual conference of the American Comparative Literature Association, as part of a seminar called ‘“Stay Woke”: The Politics of Protest Song,’ organized and chaired by Bronwyn Malloy of the University of British Columbia. I’m working with Petra Haden’s cover of the David Bowie-Pat Metheny Group collaboration, “This Is Not America,” which is the theme song from the 1985 spy-thriller The Falcon and the Snowman, to try to discover the ways in which dissent voices itself not necessarily as dissonance or discord but rather in the re-figurations of plurality in the varietals of community represented by choral song: to concoct a multiplicity out of an initial gesture at negation or lyric refusal, the promise of an America sounded from what it is not or what it refuses to be. Many of her covers of film themes and of pop and pop kitsch (such as Journey’s “Don’t Stop Believin’”) operate neither as satire nor as mere celebration, but produce a form of Americana – Haden’s collaborations with Bill Frisell and with Jesse Harris, as well as her work with her father Charlie Haden’s legacy operate in this vein, in my view – that sustains a democratizing impulse in its aural blend of irony and joy; her songs open up an auditory and audible space in which an attentive and open-hearted America can begin to hear itself more fully.

I can’t seem to stop listening to Petra Haden‘s newest album, Petra Goes To The Movies (Anti-), which I bought two days ago. Brilliantly moving versions of various film musics, from John Williams to Bernard Herrmann, made by overdubbing her voice using a similar approach to her cover of The Who Sell Out. The layered, shifting densities of her voice, her voices, her voicings — alternately playful and ardent — are really and truly moving. She has a way of finding the heart of a song, of making it breathe. Her simple duo with Bill Frisell, “I Might Be You” (the Dave Grusin song from Tootsie) is a standout. She feels her way along the melody, bouyed up by the spare chords and fragile twangling of Frisell’s guitar. A fantastic record.

I heard Bill Frisell’s Richter 858 Quartet perform last night at the Vancouver Playhouse (Frisell, with Hank Roberts, cello, Jenny Scheinman, violin, and Eyvind Kang, viola). They played two suites, composed specifically by Frisell for the group. The first half of the concert offered Sign of Life, a recent (2010) piece that seems to me to sum up much of Frisell’s deep enmeshment in Americana, with plenty of what sounded to me like overt gestures to the folksy melodicism and harmonic richness of Aaron Copland. That’s not to suggest that the music is merely derivative – the improvisational virtuosities in play in this quartet give the music, even when it seems to be through-composed, an immediacy and a vitality that never allow it to settle or calcify. Rather, their music moves – in the sense of kinesis, yes, but also with the emotional engagement that successive moments of aural intensity can offer. Frisell’s music has a melancholy brilliance that seems to me to depend on his, and his group’s, ability to accrete small surges of sound, and to carry listeners with them. They tap into a shared ruthmos, a flow. Even when he applies distortion effects to his guitar, or turns it up to produce a metal-laden snarl, Frisell’s vertical, fractured notes still incline toward this essential pulse, a give-and-take within the fabric of a common time. I think I heard a version of this movement, as rhythm, in occasional riffs from Hank Roberts, whose strummed cello seemed to blend the textures of a Gambian kora and Kentucky bluegrass plucking: human time at play. But what was most noticeable was how, amid all of what could have been serious and pensive high-brow stuff, Frisell kept smiling, at his bandmates and to himself. Despite the textures of pathos and wistfulness we were hearing, he found – and I think we did too – a kind of common joy in this music. In an age rife with cynicism, these sounds and songs still manage to affirm, and even heal. 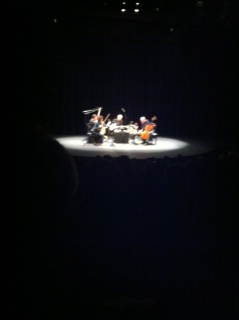 (blurry i-snapshot makes the quartet look made of light)
After the intermission, the group played Richter 858, Frisell’s 2002 composition for this group. It’s based on his viewing of a set of paintings – 858: 1-8 – by the German-born artist Gerhard Richter, and images of the paintings are projected and enlarged on a screen behind the group as they play through the eight-part suite. As the music unfolds, the visuals appear to work as a form of graphic score, as melodic lines and colours seem keyed to the striations, smears and tonal palette of Richter’s non-objective images. They’re not playing the paintings, but they feel as if they are, and this too is an effect of rhythm, of a musical rhythmatizing of the gaze. I felt my eye drawn across the projected swells of pigment by the quartet, as if the music were trying to find its own through swathes of light. I’m not trying to romanticize the experience too much, but, like Sign of Life, Richter 858is fundamentally affirmative rather than ironic – it affirms, for me, the potential, if fleeting, power of art to move us, to move.
For an encore, the quartet gave us a version of what was at first for me an unplaceable but uncannily familiar bebop tune. They staggered and looped the melody, played with it, to create a fleet four-part canon: the quick, improvisational melody – along with improvised counterpoint – skittering and weaving back through itself, upbeat, joyful. I thought it was a Charlie Parker line, but when I got home – the tune still in my head – I realized it was Tadd Dameron’s “Hot House.” Jazz, American folk and long-haired legit idioms intersected with and tugged at each other in this short coda to the concert, succinctly summing up how this group approaches history, approaches its own timeliness: by singing it, by making it sing.