[A headnote: I’m coming back to this post a day later to do a little revising and correcting. My intention with these “short takes” was to do as little revising or reworking as possible, but in this case there were some small issues that really needed to be fixed. I had the titles of the compositions wrong in my first pass, so these needed to be amended. (Thanks to Matt Mitchell for kindly letting me know the real titles.) I’m also sure that I misperceived some of the music, hearing Berne’s new pieces as versions of older work on the issued recording. Such misprisions are a hazard of being less than intimate with the scores, and of hearing this music for the first time. But the fact remains, as well, that – given what I hope is a genuine effort to map out my own auditory affect, to explain and to frame as cleanly as possible what I thought I heard and about how I was hearing it (and given, also, the challenges of the adjective, of being as descriptively accurate as I can) – that a mistaken listening seems to me as potentially interesting to think through as an attention that’s either distracted or that falsely claims acuity or expertise. I’m no music reviewer, and don’t want to pretend to be. But writing through and about the situated reception of music, particularly the immediacy of an improvised performance, which is inherently non-repeatable or, as Vladimir Jankélévitch suggests, irreversible, strikes me as a possible practice, if it works, of an active “cultural memory in the present” (a phrase I’m lifting from Mieke Bal, who repurposed it from others). So, okay, here is the revised piece.]
Tim Berne‘s quartet Snakeoil (with Oscar Noriegaon clarinet and bass clarinet, Matt Mitchell on piano and electric piano, and Ches Smithon drums, vibes and hand percussion) played a four-tune, 75 minute set at Ironworks on the final evening of the Vancouver International Jazz Festival. Berne announced the first three compositions as something like “Lamé #2,” ” Lamé #3″ and ” Lamé #1″ (in that order), but he was also slightly, well, mumbly and off-mike, so I could easily have misheard. “Don’t judge me by my titles,” he told us. It’s not that the titles had any obvious meaning for me (Berne’s music is hardly proximate to flashy pop or disco, and I’ve never seen him dress in gold lamé), but that Berne was indicating how each of the pieces formed part of a larger conception, and there was definitely a sense in which all four fit together rhythmically, harmonically and texturally. As with his earlier Bloodcountbook, his compositions tend to use long, sinewy lines — angular, deliberate meanders often taken in unison or at least in parallel paired horns and (in this band) piano. They are also constructed — again, as far as I can make out, as a listener — in sections that, like shifting puzzle pieces, seem to lock together in various kinds of timbral juxtapositions and sequences. He counted in each piece in four, but as the quartet joined in the music instantly became more metrically dense and polyrhythmic. Overlapped sonorities created fluctuating densities, an alternately thickening and winnowing counterpoint. With his move to ECM for his latest recording (by this quartet), his open-form compositional style — mixing structural exactitude with free improvisation —  seems to me to draw at times on the work of Jimmy Giuffre, although the performances leave aside any latter-day chamber music feel in favour of harder edges and more aggressively articulated extemporizing. The fourth and last composition was announced as “OCDC” (maybe?), but listening back to the Snakeoil CD it felt to me – wrongly, as it turns out – that it was an expanded, roomier version of “Spare Parts”; I thought in retrospect (again, mistakenly) the third piece they played was also a re-arrangement of “Scanners” from the same disc. (The bass-line in Matt Mitchell’s left hand sounded remarkably close to what I can hear on the recording.) I’m sure that this sort of musical re-purposing was not really what was going on (and I’m not at all asserting that this music is somehow recycled), but what my perception of these echoes does suggest to me is not only the continuity, the organics, of Berne’s concept but also that the audience was hearing not so much product as process, compositions built from predetermined cells and segments that also relied on formal elasticity and focused improvisation to expand, to animate and flesh out a given set of sounds into new and immediate music. I was very impressed by the unthrottled drive of Matt Mitchell’s playing, by the rough ecstatic energy of Oscar Noriega’s solos, by Ches Smith’s expansive and propulsive sense of time, and by Tim Berne’s own brilliantly knotty phrasing. Berne’s group offered us an object lesson in colliding composition and spontaneity, the made and the making, to intensify a performance, and to bring it creatively, with measured noisy poise, to life. 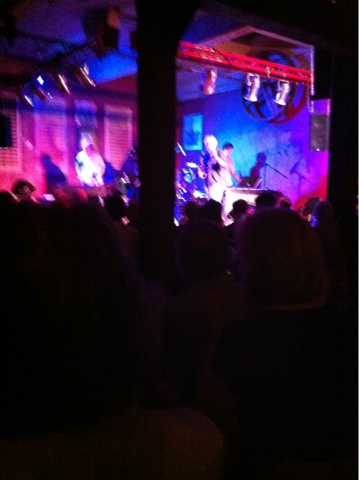 Found a copy last week of Light on the Wall, a double LP by Tim Daisy (percussion) and Ken Vandermark (reeds), recorded as a duo and both solo in Poland in May 2008, and issued on Laurence Family Records. The sound, both live and in the studio, is excellent. You can really hear Daisy’s distinctively open sense of space in the live duo set; Vandermark offers a set of solo “Etudes for Jimmy Giuffre,” but to me their duos not so much build on Giuffre’s chamber-ish conceptions, as recall duos by another Jimmy, Jimmy Lyons, with Andrew Cyrille–not that there is anything derivative in this music, but rather that both are thoroughly cognizant of their position in an emergent sense of a building tradition of forward-thinking sonic experimentation, the extemporaneous edge where the performing present takes up its audible pasts: a historicity of the avant-garde, coming on. That, and it’s a great record.