I read this paper—“Close Careful Trans Listening: Pauline Oliveros, Joe McPhee, and Rachel Pollack’s Unquenchable Fire”—on June 3, 2017 at the Montreal colloquium for the International Institute for Critical Studies in Improvisation: Still Listening—A Series of Events in Memory of Pauline Oliveros. For me, it represents a first foray into an intersectional social aesthetics, drawing together transgender writing—in particular, Pollack’s speculative fiction—with queer theory and the practice of deep listening. As I point out, the paper leans a little toward Oliveros, despite the composition and recording being principally credited to Joe McPhee. I also need to develop more fully and carefully a reading of the theology of annunciation and its relationship to gendered bodies and the dynamics of consent and the discursive power of the speech act.
You might also want to check out Still Listening, the on-line exhibition of a series of 85 85-second compositions dedicated to Pauline Oliveros.

Oh, and if you want a copy of the music, you can buy it from Joe McPhee’s Bandcamp page, here. 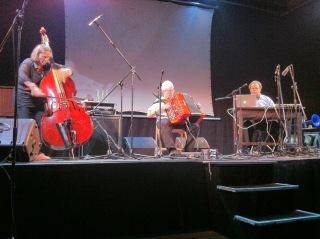 Tonight as part of the Agosto Foundation’s vs. Interpretationsymposium and festival at the NOD arts space in Prague, we heard a freely improvised performance by the trio of Pauline Oliveros (Roland V-accordion), Joëlle Léandre (double bass and voice) and George Lewis (laptop, trombone). This morning, George Lewis gave a talk on the prehistory of improvisation studies, making a case for approaching improvisation not as a study of criteria or constraint but of what he called “conditions,” which seemed to me to be a call to attend to the diversity of generative circumstances, and their intersection in historically situated performances. He was arguing, gently, against defining improvisation as such, and instead asking his audience to consider how improvising might open up possibilities for self-aware creative practice. The concert this evening was introduced by, I believe, Cynthia Plachá of the Agosto Foundation, who reiterated something Joëlle Léandre had said at a workshop this afternoon, that when you improvise “you must be prepared for the unprepared.” Both of these assertions – around the conditional or situated sharing that improvisation enacts, and around the paradoxical acuity involved in improvisational practices – informed the trio’s collaborative music-making. 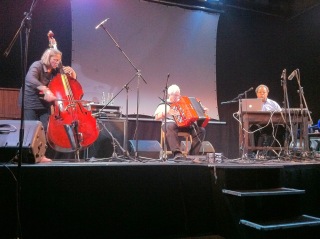 They performed one 45-minute piece, recorded by Czech Radio for broadcast, which apparently Pauline Oliveros had named “Play As You Go” ahead of time, although there wasn’t any pre-planning. Joëlle Léandre’s playing had a firmness of touch and such a strikingly clear sense of line or trajectory, her tone consistently full and resonant. Pauline Oliveros’s electronified accordion shifted between foreground and background, often supplying aural textures that were by turns cohesive and disruptive, simultaneously braiding into and fraying at the trio’s combined sound-palette. George Lewis layered samples from his laptop, many of them having a certain digital brightness that he subsequently often pulled and muddied, electronic sheen mitigated by the more closely corporeal sounds of breath and lip, particularly when he used his blue (!) trombone as both a sampled sound source and as an unmodified instrument: his characteristic fierce blatt, at the few moments when he did seem to dig into his horn, was instantly recognizable. But this wasn’t a music of solos or singular voices so much as of organic reciprocity and co-creation. 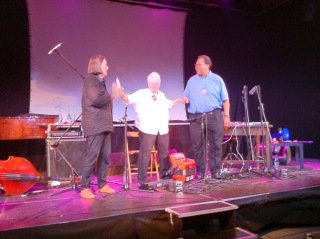 There were some passing moments – when Joëlle Léandre started to sing lyrically about the slightly oppressive heat in the performance space (“It’s hot, it’s hot . . . “) or when Pauline Oliveros echoed a cough from the audience by jabbing her right hand at the accordion’s lower keys – of humour and irony, suggesting how all sonic resources, high and low, occasional and musically dense, could be repurposed into interactive soundings. The music didn’t so much progress or develop as trace its way through a loose series of temporarily sustained, situated idioms – sometimes meditative, sometimes contrarian, sometimes melodically assertive, sometimes coevally plural: layers of shifting texture, refigurings. This was a brilliantly sui generis music, and we left the concert feeling energized, enlivened and moved.

This is the abstract/proposal for a paper I am set to give at the Vs. Interpretation colloquium and festival on the improvisational arts, which is taking place in Prague in the Czech Republic on July 17-20, 2014. The colloquium is supported by the Agosto Foundation, and keynote speakers include George Lewis and Pauline Oliveros. The original theme for the colloquium had to do with “improvising across borders.” I am aiming to extend my own thinking about the intersections of improvisational practices and the poetics of listening by addressing the work of Taylor Ho Bynum and Nathaniel Mackey. So here it is:

Released in November 2013, the multi-format set of recordings of Taylor Ho Bynum’s innovative composition for improvising sextet, Navigation, both culminates and continues his fascination with the interfaces between the extemporaneous and the written, the scripted and the performative. Separate LP and compact disc versions of the work are paired with different fragments of text from poet Nathaniel Mackey’s experimental epistolary novel Bass Cathedral, a book that Ho Bynum has recently said, for him, is probably the best writing about music he has encountered. Earlier compositions by Bynum, such as his suite Madeleine Dreams, have not only used prose fiction as libretto, but more tellingly have striven to address sonically and structurally the complex and often fraught relationships between the musical and the diegetic, between sound and sense. Navigationtakes up Mackey’s own address to this interface, sounding what Mackey understands as creative discrepancy, an expressive troubling of formal and cultural boundaries. Name-checking both Sun Ra and Louis Armstrong, Mackey has noted what he calls a “play of parallel estrangements” in improvised music and in poetry, arguing that music “is prod and precedent for a recognition that the linguistic realm is also the realm of the orphan,” that is, of the limits of sense, a liminal zone of both orchestration and letting go. Ho Bynum’s recordings pick up not only on Mackey’s thorough enmeshment in jazz history, but also on his intention to pursue the expressive potential of language and of music at their textural boundaries, at moments of troubling contact between divergent worldviews, or between dissimilar social and cultural genetics. Composing using what Mackey calls m’apping – a portmanteau splice of mapping and mishap, pursuing what Mackey calls the “demiurgic rumble” of discrepancy, improvising across the gaps between careful craft and unruly noise – Ho Bynum conjures a hybrid and collaborative music that blends the complex Afrological heritages of jazz performance style (audible in Navigation’s network of gestures to Charles Mingus and Duke Ellington, to name only two key forebears) with graphic scoring techniques derived from Sylvano Bussotti or Wadada Leo Smith, among others. If improvised music, for Mackey, represents – and represents precisely – what defies descriptive capture in language, what eludes ekphrasis, then the music of Taylor Ho Bynum’s sextet aspires to invert that representational effort, to take up the discrepant aesthetic tactics of Mackey’s writing and to assess how the written (as graphē, as graphic score) can approach and test the expressive limits of making music happen. Taylor Ho Bynum’s compositions for improvisers offer exemplary instances of how to negotiate creatively the boundaries between text and sounding, and suggest a means of addressing, too, the graphic work of other composer-improvisers, including the work of Nicole Mitchell, Anthony Braxton and Barry Guy