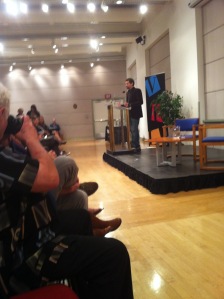 I heard Wayde Compton at the Vancouver Public Library on September 20, 2011, giving an inaugural reading as the VPL’s seventh writer-in-residence. Rather than poetry, he read from a manuscript version of a short story he’d been working on, part of what he said was an emerging collection of fiction that was likely to see publication in the coming year. (He would read another story from this set at The Word on the Street that coming Sunday, as part of Event magazine’s event there.) My notes are faulty — I was trying to listen rather than copy things down — but I think the piece was called “The Front,” and consistent of what he called an annotated bibliography for a fictional — meta-fictional? meta-non-fictional? — art-movement known as “rentalism,” which he imagined had emerged around Vancouver in the past decade or so, cued by a passage from an obscure black British Columbian writer (“Nothing’s for sale, but you’re free to browse . . .”), which decribed storefront arrangements of goods and objects as art installations. Wayde C. said in response to questions afterward that he is interested in hoaxes and false histories, and the intersections between fiction and history, but his narrator (as I heard it) in some ways put things more succinctly: “When I read this now I don’t know if I believe it anymore.” This wasn’t, for me, an articulation of some post-modern knowingness, but instead a kind of celebration of creative uncertainties, how voices inhere, often unacknowledged but still making themselves nearly heard, in the cracks and fissures of the visible and the audible, as small but signficant “hacks” of the apparant surfaces and walls of sound that surround us. This story seemed to me to be a significant development on something like what Linda Hutcheon called “historiographic metafiction,” working to restore something of the experiential textures of hand, eye and ear, of sensory apparatus — which Compton seems to find displaced metonymically into the material contacts of stylus and tapehead and dial — to its often disembodied archeologies.