My Tweets
I’m starting out this post on my mobile phone app while waiting in line for Red Cat Records to open on this April Saturday morning for Record Store Day. So it seems like an appropriate occasion – standing iPhone in hand to pick up some new vinyl – to write about the copy I received by mail-order, yesterday, of the Rune Grammofon LP stones, a live recording of an improvised duo performance at the 2011 Vancouver International Jazz Festival by saxophonists Mats Gustafsson and Colin Stetson. It was their first meeting in this configuration, although both have played for years in similar alt-music circles, and seem to share a sensibility for mixing post-punk and avant-jazz in their playing. They also both have a well-established thing for low horns: on this occasion, Stetson plays alto and bass saxophones, Gustafsson the tenor and baritone. The concert itself was fairly brief, a 45-minute set at a packed Performance Works (there was no admission charge) on Granville Island, on a Sunday afternoon in late June. And I was there, too. 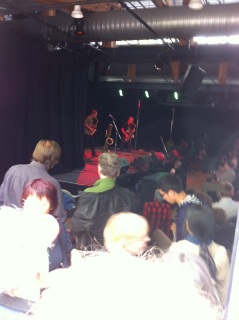 The four pieces on the record – which clock in between five and twelve minutes each – have been titled retroactively, and presumably by the Swedish Gustafsson, with fragments “inspired by” (adapted from?) the poetry of his compatriot, the modernist Gunnar Ekelöf: “stones that rest heavily”; “stones that can only be”; “stones that need not”; stones that only have.” I don’t recognize the references, but I don’t know Ekelöf’s poetry well enough, not at all. But even as a set of post hoc cues, the titles not only lend the slightly-edited set on record the feel of conceptual coherence, which it actually has, but also suggest something of the improvisational aesthetic at work here. I haven’t been able, with a cursory search, to locate any of the source-texts for the titles, but stones are a recurrent image in Ekelöf and are associated with enthropy and death, a trace perhaps held over from his early-career “suicidal” poetics, as in these lines from “The Sea is the Greatest Sculptor” (translated by W. H. Auden and Leif Sjöberg):
The sea and death
There is no stone so jagged
the sea won’t rub it smooth
or grind it to sand
or finer
But I don’t hear in the duo’s music either lapidary patience or worried foundations. The emphasis on low fundamentals, the long drones and overtones with which the first and longest track on the record begins for instance, gives way to tongue flutters and plunked finger-pads, vocalized growls and arpeggiated counterpoint: interruption and cross talk, as much as the meditative convergence of lines. The music is essentially dialogic, but that conversation is driven by antithesis as much as it is by accord, the verso of Ekelöf’s poetic, his “Non Serviam,” a biblical phrase which can translate a duplicity, a contradiction, meaning both I will not serve and I will not transgress, an amalgam of refusal and deference. Or, as Ekelöf frames this disavowal poetically, as a fraught relationship to identity and belonging,
I am a stranger in this land
but this land is no stranger in me!
I am not at home in this land
but this land behaves as if it where at home in me!
[. . .]
I cannot live in this land
but this very land lives like venom in me!
A version of this admixture of contrariety and ecstasy informs Stetson and Gustafsson’s interplay. The second track moves through echoes of Harry Carney-like Ellingtonia to sonic gesticulations at Roscoe Mitchell‘s angularities. The stuttering upper partials at the opening of the third cut recall Pharoah Sandersin Coltrane’s “The Father and the Son and the Holy Ghost,” while fragments of a Mancini-like caper theme cycle through the fourth. The music is live, in situ and a little noisy; people murmur, a child speaks, other music from a distant outdoor stage thumps softly underneath one piece. But the duo only seems to draw more energy from the hubbub. They take possession of their bandstand, committed and aggressively vital, making the place speak, making it happen. Not as homecoming, no, but as an evocation of creative estrangements, the coincidence of resonant differences: the audible collisions of what need not and can only be.