My Tweets
Betsy Warland conducted an excellent afternoon workshop on June 3 at the Canadian Music Centre focused on approaching art song from the vantage of a poet. She suggested moving beyond the poem as the genetic artifact for a song – as a source text that a composer then takes up and sets – and instead thinking more about the dynamic and nascent interrelationships between words and music, their interplay. Since the material coming out of the Art Song Lab is currently in development, participants are given a pretty much unprecedented opportunity to allow text and sound to intersect with and to reshape each other – a mutuality. Extending what Ray Hsu had said at our initial meeting the day before, Betsy Warland suggested that poet, composer, performer and even listener were engaged (both within and as a kind of network, I think) not merely in acts of interpretation but also in processes of mutual translation, a claim that for me gestures more fully toward the interplay of differences in the work, instead of encouraging a composer  to ferret out various hermeneutic cohesions between his or her composition and the poem and aspiring to make the musical and verbal likenesses. The emphasis on the creative potential of difference, tension and experimentation – trying out other things – really enlivened the collaborative aspects of compositional practice. Practice might be a resonant word here, in its temporally contrary senses both of praxis and of rehearsal. 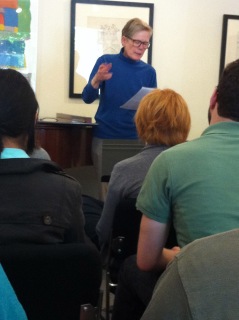 Betsy Warland also strongly suggested that we develop our art songs by focusing on emotional integrity, continuity and fidelity to experience – all of which will produce works that function as dramatic, communicative acts, as good songs. But I also hear a bit suspiciously in such very practical and excellent advice the ghosts of the kind of hermeneutic organicism I am  a little inclined to try to push through and to push aside in my own writing and thinking. She said she thought of art song as potentially negotiating a set of tensions (formal, conceptual, performative) in each song, on its own terms. Yes, exactly. So, the point might be not to discard the hermeneutic, but to tension it, to work at and through it.
In the rehearsal sessions for the songs composed around my own poem, with soprano Phoebe MacRae and pianist Rachel Iwaasa, I found myself thoroughly impressed by the rhythmic sophistication both of the composers and of the performers. The poems on the page have very tight, specific syllabic rhythms (although the first section has been shifted out of an Emily Dickinson-ish small set of fourteeners and made into a brief prose-poem – though the folk-hymnal rhythms ought to still be ghostly there). Both  composers took up the words from different rhythmic angles; Alex Mah’s score seems fairly particulate, pulling at, and apart, individual words into their phonemic and syllabic components, working at the fragmentation of pulse at the level of the word, while David Betz has lifted phrases and segments from the poem, crossing over linear and spatial divisions (as I had arranged them, lineated them) to create what are still fragments, but which have more extension by enjambing – which has the effect of drawing out slightly longer cross rhythms from the language. I find I’m not especially attached to the poem as a verbal artefact, as something of mine anymore, or at all. I like the ways in which in these settings it takes itself apart, and reassembles as something else, someone else’s, but still linked to what I started with. Rachel also mentioned how she negotiated triplets and rhythmic clusters of fives and sevens, but overlaying them in her mind’s ear with words – a cluster of seven against four, for instance, can be felt by imagining saying the word “individuality.” Cool, I think. The abstraction of musical sound returns obliquely to the sematic loadings and rhythms of the colloquially verbal.