Home » Uncategorized » Mary Halvorson, "Songs that Get Stuck in My Head"

Mary Halvorson, "Songs that Get Stuck in My Head"

Just come back from an hour-long afternoon public workshop with guitarist Mary Halvorson at the Roundhouse Community Centre in Yaletown, part of the last weekend of the Vancouver International Jazz Festival. It was a real privilege to hear her talk and play. She was personable and articulate, taking questions and playing a handful of brief solo improvisations. 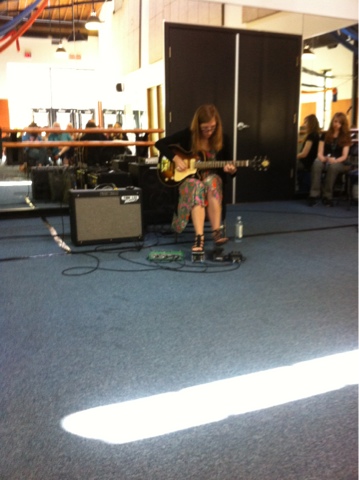 She confessed that she was in the midst of “working on solo guitar music,” and that she hasn’t really performed solo up until this point in her career as an improviser. She said that she had decided to base her nascent solo work on “songs that get stuck in my head,” which at this point were principally jazz standards, although she was also looking to various “compositions by other people” as source material. She admitted that she tends to focus on melodies and has a harder time “remembering the chords.” But there was nothing diffident or self-effacing in her aesthetic or in her performing; her spotty memory seems to offer creative opportunity rather than impediment. Or, as she put it, “I’m going to make up my own chord changes to these existing melodies.” She offered a foreshortened but compelling version of “Beautiful Love,” laced with pitch-bent burbles, halting twangs and lyrical turn-on-a-dime redirections. She likes, as she said, “weird left turns and falling off cliffs” in music–her version of the “sound of surprise”– but her playing also drew out a gently fraught lyricism in each of her lines. If this really was a hint of what’s to come, her solo work is going to be beautifully unsettling and eclectically brilliant. She talked at some length about some of the challenges she feels she is facing combining her own idiosyncratic approach to the instrument with a more idiomatically “jazz” approach to playing and to musical form. (In fact, before she began talking, she played us a track from her iPod, Johnny Smith doing “Moonlight in Vermont,” and admitted her love of Smith’s sound. Smith had passed away a little over a week ago.) She also played a track from her yet-to-be-released septet album, roiling layers of horn and guitar. 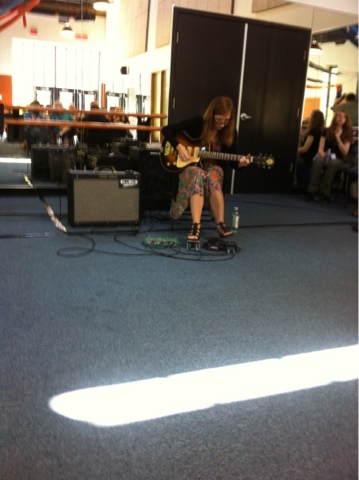 When asked about connections between her styles of band leading and composition, she said she tries to enable and to support the members of her group, and is keen “not to be too controlling.” She pointed to her experiences with Taylor Ho Bynum‘s sextet–the example was suggested by someone in the audience–as a possible model for relinquishing control and instead creating democratic interactions among the players. At the same time, referring to her studies with Anthony Braxton (whose music she said helped her decide to drop her courses in biology and pursue music) and with Joe Morris, she said she felt that “the teachers you have really shape who you become,” noting that both of these mentors encouraged her to follow their example in seeking out her own idiom, her own ways of making music. A brief improvisation built from cascading pulses closed out the workshop.