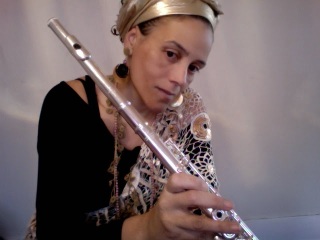 Nicole Mitchell gave a keynote address at “Jazz, Race and Politics: A Colloquium” co-presented at the 2012 TD Vancouver International Jazz Festival by Coastal Jazz and the Improvisation, Community and Social Practice research initiative. Her talk was given the title “Afrofuturism Now,” but she ranged widely in her discussion of the cultural politics of African-American improvised musics, engaging with the work of Sun Ra and of Max Roach and Abbey Lincoln. She also explored in detail many of her own compositions and performances, and discussed her relationship to community and to heritage. She talks about her recent Xenogenesis Suite, which she composed as an homage to Octavia Butler. She also performed a brief flute solo (at about the 36 minute mark in the recording). The audience for her talk included Ajay Heble, Tomeka Reid, Billy Hart and Billy Harper – Billy Harper can be heard asking questions and engaging in discussion with the audience at the end of the talk, as well. (He and Billy Hart were scheduled to engage in a panel discussion next.) I have edited out the audio examples from Max Roach and Abbey Lincoln, and from Sun Ra, but I have retained Nicole Mitchell’s own musical examples. I am the one who can be heard introducing the colloquium (with some references to the work of Stuart Hall and Wayde Compton) and also giving Nicole Mitchell a brief introduction. Copyright for the intellectual and creative material on this recording remains with Nicole Mitchell.