My Tweets
Late Sunday night, June 29th, for the last concert of this year’s TD Vancouver International Jazz Festival’s Innovations Series at Ironworks, I caught the first performance by an extraordinary new trio – Francois Houle, clarinets, Alexander Hawkins, piano, and Harris Eisenstadt, drums.  “On fire!” one member of the audience called out at the conclusion of their vociferous and strident opening number, an annunciation of gathering energies. I heard the trio again at a fantastic afternoon gig at Performance Works on Granville Island for Canada Day, and it felt as if, in the intervening hours, the group had transformed from a brilliant summit meeting of next-generation improvisers into a coherent and organically responsive ensemble. 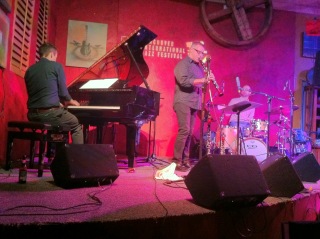 The set list for both performances was the same, as far as I could tell: an array of original compositions from each of its three members, along with two art songs by Steve Lacy: “Esteem” and “Art.” Aside from paying tribute to their avant-jazz lineage, the inclusion of the Lacy material offered their audience some sense of the dynamic historicity of the trio’s present-tense music-making. A previous project by Houle, for instance, engaged with the compositions of John Carter, himself an improviser deeply cognizant of the complex and conflicted history of jazz; Houle’s music seems to me often to negotiate creatively between the expressive and the given, to find its contingent voice at the interface between a virtuosic performer and a motile tissue of echoes, sounding and refiguring its liminally audible past. In fact, a version of this presencing informa the playing of all three. This trio co-creatively takes up each member’s disparate instrumental and aesthetic lineages, and finds points of tension and intersection, prodding their collective sound forward along the shared leading edge of their on-stage, real-time encounter, something Herman Melville – from whose poem “Art” Lacy’s composition took shape – names “pulsed life” that emerges from the creative and attentive collision of unlikenesses:
In placid hours well-pleased we dream
Of many a brave unbodied scheme.
But form to lend, pulsed life create,
What unlike things must meet and mate:
A flame to melt—a wind to freeze;
Sad patience—joyous energies;
Humility—yet pride and scorn;
Instinct and study; love and hate;
Audacity—reverence. These must mate,
And fuse with Jacob’s mystic heart,
To wrestle with the angel—Art.
Eisenstadt, Houle and Hawkins fuse audacity and reverence in their music, which enacted during those two performances a generative wrestling with its angelic forebears and also with the immediate living context of its realization. (Lacy says in his own notes to the song that the poem seems to him to frame “the exact recipe for this activity,” for improvisational music-making.) This trio’s instrumentation (reeds/ piano/ drums) recalls the grouping that recorded Steve Lacy’s The Flame (from 1982, with Bobby Few on piano and Denis Charles on drums), but I have to say that I didn’t recognize either of the Lacy compositions at first hearing, and that Hawkins’s style is very different from Few’s, and that he draws out a more orchestrally thick and layered sound from the piano. His occasional use of wide, ringing intervals in his left hand recalled another of Lacy’s piano cohorts, Mal Waldron, but despite the inclusion of Lacy’s compositions, the Hawkins/ Houle/ Eisenstadt trio’s approach and textures were markedly different from this particular precursor.

Instead, especially during the second performance, when Hawkins launched into an extended solo passage of fractal stride, it felt to me, at least for a few minutes, as if the spectre of Teddy Wilson were somehow in the house, and that the drive and sustained ebullience of Eisenstadt’s drumming called up the impeccable abandon of Gene Krupa – whose fierce swing feel sometimes surged and ebbed from his brushes – who played alongside Teddy Wilson in Benny Goodman’s famous trio, whose instrumentation this current trio duplicates exactly. Or to go even further back I thought I could hear some of Johnny Dodds’s playing with Jelly Roll Morton, maybe with a hint here and there of Baby Dodds’s rolling tom-toms or Sid Catlett’s demiurgic rumble (to poach a phrase from Nathaniel Mackey). Still, this music isn’t in any sense neo-trad, and remains decidedly experimental in its orientation, extemporaneously free. But its approach also isn’t non-idiomatic – after Derek Bailey concept of “free” improvisation – so much as poly-idiomatic, a version perhaps of what Steve Lacy called, in the early 1970s when he composed “Esteem,” “poly-free”: a music that’s multivalent, iterative, recombinant. At one point during the first gig, for example, Houle’s circular breathing and quick-fingered looping lines recalled Evan Parker’s solo soprano technique, a sonic gesture that, more than mere homage, lent a contingently historical sense of form even to a doggedly contemporary musical avant-grade. It was as if, for each member of the trio, clusters of aural vocabulary and figments of style were simultaneously activated, cross-purposed, undone, imaginatively remade and even transubstantiated in the crucible of any given moment into a kinetic and differential accord: an alchemy of sound that I hope they managed to record, or might record soon, because, well, I’d like to hear it happen again.

By kevinmcneilly in Uncategorized on July 3, 2014.
← Pursuing Ecstasy: Darius Jones and Tarbaby at Ironworks Toward an Improvisational Pedagogy 1 →