My Tweets
[There are a number of things – poems, travel, concerts, media stuff – from the summer and fall of 2014 I was set to write about, but life and whatever seem to have taken precedence, so I’m going to try to catch up on some of these things in the next few weeks. I have about a dozen or so fragments that need reworking, expanding, editing and polishing before they can make their way into the Frank Styles neighbourhood. Here’s the first of a bunch.]

On the night of Friday, August 29, Taylor Ho Bynum played a duo concert with François Houle at The Apartment, a small gallery on East Pender, just off Main Street in Vancouver’s Chinatown.  It’s been a while, but I took down a few notes to jog my memory. Taylor started with a solo piece; the concert was the first semi-official stop on his solo West Coast Bicycle Tour, which would see him pedal a huge number of miles alone down the left coast of North America, through September to early October. He kept an on-line diaryon his website, and has put up excerpts of his musical encounters – some planned, some by happenstance – on a Sound Cloud page. The solo had shards of marches, echoing maybe a little some of Anthony Braxton’s interest in John Philip Sousa and brass marching bands, but with mixed in growls, swoops and other cornet chop suey, concocting a few momentarily avant-Cootie-Williams-like lines.

François Houle joined him for a version of Taylor’s composition “All Roads Lead to Middletown.”  Here is a field recording of their performance:

And here is a  duo version Taylor Ho Bynum recorded with Anthony Braxton in 2002 at Wesleyan:

A version of Houle’s composition “Seventy-Three” followed, a tune originally recorded on his album In the Vernacular (Songlines, 1998), which is dedicated to the music of John Carter. Carter, Houle said afterward, would have been seventy-three at the time of the recording. Much of the music, besides its in-the-moment spontaneity, was vitally self-aware of its own historicity, its sense of a present deeply enmeshed in lineages and antecedents, but dynamically and restlessly so. Houle also mentioned Carter’s duets with Bobby Bradford: forebears who continue to open up new and challenging possibilities for this music, as part of a living tradition of experimentation and forward motion. The duo played “Shift” from Taylor’s suite Apparent Distance, and then closed with a blistering and challenging reading of Anthony Braxton’s Composition 69c, a sinuous monody combining bluesy flatted fifths with angular sonic geometries. (At the set break that followed, a little out of breath and a bit unsatisfied with his performance, Taylor recalled speaking with Kenny Wheeler about how difficult and even lip-splitting playing Braxton’s compositions in the quartet could be.) For the second set, the duo returned with versions of two Carter pieces (played originally with Bobby Bradford): “Comin’ On” and “Sticks and Stones.” 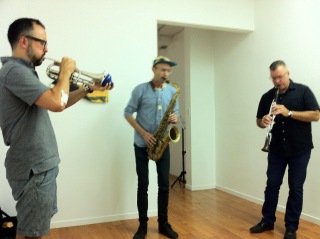 The concert closed with an extended trio; Houle invited tenor saxophonist Nils Berg to come up, and they offered a ten-or-more minute extemporaneous tone poem, with Berg’s contributions recalling the restrained lyricism of late Lester Young, or perhaps even Warne Marsh in a reflective mood. Beautiful things: bright moments, as Rahsaan might have put it. Here is Taylor’s field recording of the trio, so you can hear it for yourself. 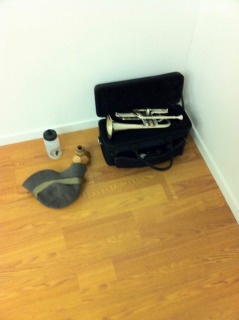 By kevinmcneilly in Uncategorized on February 20, 2015.
← Short Take on Thumbscrew Live at Ironworks (Vancouver, 7 February 2015) On Stephen Burt, The Use of Poetry and the Use of Place →