My Tweets
In an essay revised for the second edition of her Nomadic Subjects, Rosi Braidotti takes up the fraught question of men in feminism, somewhat ironically I’d say, by building on Michel Foucault’s concretizing of the conceptual, the “materiality of ideas”:
One cannot make an abstraction of the network of truth and power formations that govern the practice of one’s enunciation; ideas are sharp-edged discursive events that cannot be analyzed simply in terms of their propositional content. (264)
What this means, for Braidotti, is that
heterosexual men are lacking intellectually […] a reflection on their position in history. The politics of location is just not part of their genealogical legacy. They have not inherited a world of oppression and exclusion based on their sexed corporal being; they do not have the lived experience of oppression because of their sex. Thus most of them fail to grasp the specificity of feminism in terms of its articulation of theory and practice, of thought and life. (265)
The politics of sex and sexualities, for Braidotti, needs to account for the materiality of ideas, and to address and even to enact not merely propositional or conceptual empathies, but the interactive negotiation of differences, or better, of pluralities; her Deleuzian nomadism, sieved through Luce Irigaray, wants to work through an amalgam, an admixture, an assemblage of intellectual deference and embodied resistance to his “becoming-woman”:
For Irigaray, as for Deleuze, the subject is not a substance, but rather a process of negotiation between material and semiotic conditions that affect one’s embodied, situated self. In this perspective, subjectivity names the process that consists in stringing together—under the fictional unity of a grammatical I—different forms of active and reactive interaction with a resistance to these conditions. The subject is a process, made of constant shifts and negotiations between different levels of power and desire, constantly switching between willful choice and unconscious drives. (274)
This blend of situated excisions and unraveling sutures characterizes Braidotti’s repurposing of Deleuze, but what I’m hearing here also resonates with my current reading of Charlotte Perkins Gilman’s “The Yellow Wallpaper” for my Arts One class. I have to confess that I bristle – just as she appears to predict I might – at Braidotti’s foreclosed feminism, at my preemptive and summary exclusion from feminist critique by virtue of a generalized bifurcation of human sexual anatomy into a male-female antinomy, a division which, despite her philosophical pluralism, Braidotti still maintains. But I don’t want to appear to be a resentful, if privileged reader, grumpy about some area of gendered experience that he can’t finally appropriate or even access. And I do think Bradotti has a point: that sexual politics must emerge from materially succinct, and distinct, lived subject positions, to which we have incomplete access at best. (I am concerned, still, about the seemingly unimpeachable gender solidarity, however, that she continues to claim.)
Rather than resentment, I want to suggest that this incompleteness, this dis-closure (as opposed to foreclosure) might be more productively understood as an unnamable and inassimilable source-point, a singularity, around which surges of differential and even creative energy might be said to accrete.  As a man in feminism, or at least in its sights, what I want is to think toward those gendered exclusions, those singularities, not to appropriate any vital differences – what makes other lives others – but to participate, even if only tangentially, in what Gilman characterizes as an economy of difference, what she calls (in the story and in her tract) work:
Those who object to women’s working . . . should remember that human labor is an exercise of faculty, without which we should cease to be human; that to do and to make not only gives deep pleasure, but is indispensible to healthy growth. Few girls today fail to manifest some signs of this desire for individual expression. (Women and Economics 157)
Labor – which she distinguishes from the “morbid, defective, irregular, diseased” and pathological work of human motherhood, the reduction of women to reproductive and domestic vessels (181) – is for Gilman essentially expressive, inasmuch as it entails an instrumental – that is to say, a poietic – and even causal relationship between what Braidotti calls “theory and practice” or between the propositional and the active. Gilman’s critique is as site-specifically and as historically gendered as Braidotti wants feminist work to be, but it also generalizes itself and its “lived experiences” in contradistinction to Braidotti’s exclusions, to introduce women’s experience into an aggregate of the human, to produce a still fraught but nonetheless accessible, differential humanism. The exclusion of women from the purview of the human is for Gilman something to be overcome – in the act of writing, no less – rather than a set of exclusions to be materially reversed and re-instantiated by a reactive, if just, politics:
What we do modifies us more than what is done to us. The freedom of expression has been more restricted in women than the freedom of impression, if that be possible. Something of the world she has lived in she has seen from her barred windows. (Women and Economics 66)
The determinisms of oppression need to be overcome, but it is in the eruptive and disturbing – and decidedly material – acts of resistance, including a resistance on and through paper, as much as the utopian teleology of a better, just and “modified” world, that Gilman values: the work, the lived and living process, of pushing back and of tearing down and of breaking through. 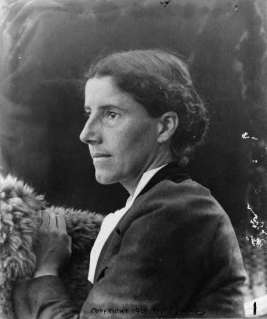