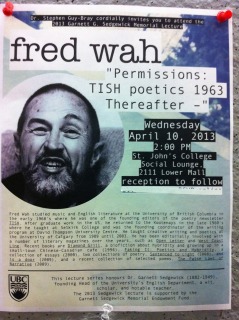 Thanks to Fred Wah, who gave a very fine and intellectually poised talk yesterday afternoon—“Permissions: TISH poetics 1963 Thereafter – ”—as the 2013 Garnett Sedgwick Memorial Lecture here at the University of British Columbia. He described the emergence of his own poetics alongside the founding of the mimeographed poetry journal TISH by a small group of student poets, studying with Warren Tallman and Ron Baker, among others, in the English Department here in the late 1950s and early 1960s. (The history of TISH is by now fairly well documented: see work by C. H. Gervais, Eva-Marie Kröller, Frank Davey and Keith Richardson. Those young poets—George Bowering, Frank Davey, David Dawson, Jamie Reid and Fred Wah—would go on, along with others associated with the group including Daphne Marlatt, to have substantive impacts on English-Canadian poetry and poetics.) Wah’s title, “Permissions,” alludes to the first poem of Robert Duncan’s The Opening of the Field (1960):
Often I am permitted to return to a meadow
as if it were a given property of the mind
that certain bounds hold against chaos,
that is a place of first permission,
everlasting omen of what is. (Duncan 7)
Wah suggested that Duncan’s visit to UBC in the summer of 1961, following on the publication of The Opening of the Field, offered an opening for him into a set of poetic possibilities, and presented “a place of first permission” in as much as it directed his thinking toward place, and seemed to offer him permission “to engage the local,” to turn to his own locale, Vancouver in 1961, as viable source matter for poetry. He remembered the impact of Duncan reading this specific poem at the university that summer. (Extensive audio of three lectures at UBC by Robert Duncan, delivered from July 23 to 25, 1961, and attended by Wah, can be found hosted on the Slought Foundation website, in a cluster curated by Louis Cabri; Cabri has edited Wah’s selected poems for Wilfred Laurier UP. The Fred Wah Digital Archive provides open access to essential materials, ranging from manuscript to video recordings, from throughout Wah’s body of work.) 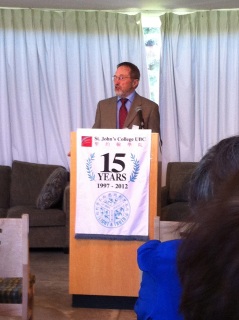 His lecture traced a trajectory of concern in his own poetics, over the course of at least 50 years now, from place to face to race, as he put it, coming to his more recent interest in cultural hybridity. But at all points, he suggested, he remained attentive to particular figurations of opening, with Duncan’s text serving as locus (non) classicus, coalescing in the “space of [creative] equivocation” marked by the hyphen, an equivocation between permission and restriction that gives rise to certain uneasy formal traits in his writing. He referred to the impact of Gary Snyder’s innovative diction (in “Riprap”), of Robert Duncan’s “tone-leading of vowels,” and of Charles Olson’s projective verse, a “poetics yet to be found out” in which prosody served as a musical, generative tool. I don’t want to give the wrong impression; most of Wah’s talk was historical and anecdotal, and he occasionally drew out members of the audience (such as W. H. New) who had also been studying at UBC at the time. But I think I was drawn, as I listened, to the more technical and formal claims Wah made, his disclosures – sometimes in passing – about how his own ear for language works. Jazz improvisation, he suggested, “flipped him into poetry,” and as in jazz, he liked to play around with the music of words. I asked him afterward during the question period if he could elaborate a little, and he said that he understood improvisation “as a way of questioning assumed structures,” drawing analogies in particular with the capacity for chafing at the strictures of composition (and overly careful composure, perhaps) in the awkward excess of “the long phrase, the long ad lib.” (“I never did do well at composition,” he admitted.) A trumpet player himself, he referred to Miles Davis and Chet Baker; I understand the subtle instabilities Wah suggests he hears in both of those players’ phrasings, although I’m not sure about the length of their lines. In any case, the sense of the poetic line as interrogative breath seems to me to be crucial here, and something at the core of how Wah’s writing happens.
I first came to Wah’s poetry in the early 1980s when I was an undergraduate at the University of Western Ontario. I found a copy of his Breathin’ My Name with a Sigh (fresh and unopened from Coach House Press) on the shelves in the Weldon library, and I remember what struck me most were the indentations and spacings of the poems on each page, their typographical shapes. What caught my eye, too, was what I recall as a reference to Albert Ayler, to “Ayler music,” in one of the texts. I was getting deeper and deeper into Spiritual Unity and Vibrations and Witches and Devils at that point, and here unexpectedly, surprisingly, was someone writing poems that emerged, somehow, out of that open listening. It had been years, but before Wah’s talk I tried to search out the phrase, to find where it came from. It wasn’t, it turns out, from Wah’s book. It’s funny how lines can blur. I re-located it in George Bowering’s introduction to an earlier selected poems from Talonbooks, Loki is Buried at Smoky Creek (1980):
What the referential-descriptive mind sees as disorder (Chinese or Ayler music, for examples) is really part of another order. & not a competitive one, either.
So Wah is essentially a musician. He does not write fiction because his aesthetic is not geared to construction. (Once, trying to build a cabin, he put the hammer thru his front teeth.) Rather his muse urges continuity, making a line of music that disappears as it goes, like mist thru the branches. He blows solos that derive their meaning from their con-text (see how many of his poems are “letters” to other poets), in the whole forest of the composition. With others he conspires to sound our world.
He is the most musical of us all. (Loki 17)
The disorder-order dyad, which Wah reframed yesterday in his talk as permission-restriction, still obtains in his thinking, and Bowering’s intro is replete with resonances and flares (although he doesn’t quite anticipate the “bio-fiction” of Diamond Grill, and he makes Wah’s partial “Chinese” background seem a little too unproblematic). But when he says that “with others”—and Wah is, preeminently, I’d say, a poet of shared and open alterities—Wah sounds our world, sounds us out and sounds out to us, I think Bowering has it exactly right. And it’s this improvisational word-music, which some of us years ago thought we might have heard in a kind of generative relation to Albert Ayler, that Wah continues to pursue, and to make happen.
Some Books I Cited
Duncan, Robert. The Opening of the Field. New York: Grove, 1960.
Wah, Fred. Loki is Buried at Smoky Creek: Selected Poems. Vancouver:
Talonbooks, 1980.
– – -. Breathin’ My Name With A Sigh.Vancouver: Talonbooks, 1982.

By kevinmcneilly in Uncategorized on April 11, 2013.
← My Poem of Ruins Time Pressures: Short Take on Roscoe Mitchell with Tyshawn Sorey and Hugh Ragin →